I have to say, for the last ten years, I've wanted to get into screen printing. But I assumed it was a super expensive field of art from looking at these $500+ kits at Ryonet and silkscreensupplies.com. Once or twice a year, I'd google more about it, until finally a few months ago I realized I could make my own one color press, and buy starter supplies for fairly cheap. I bought the book PRINT LIBERATION: A Screen Printing Primer, and started at it.

Next Saturday is also Spokane Comicon 7 (yes, there have been SEVEN already). If you're in or around Spokane, come check it out! The more who frequent this con, and spread the word, the bigger the con will get. I'd really like to see this con be the big Eastern Washington con of the year. It's a lot of fun, and the organizer is a great guy.

In preparation for the con, I am working on three silkscreen prints. They are 11x17 black cardstock with white silkscreen images: 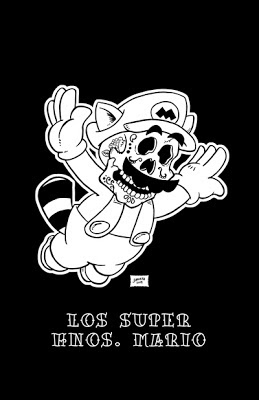 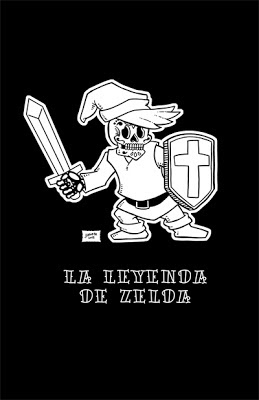 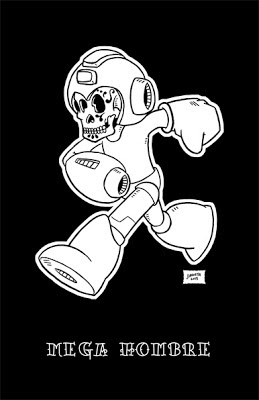 But, unfortunately for me, too many things are coming to a head. I've been working a lot the last few weeks, which has been a blessing and a curse. I need the cash, and I'm more than willing to work, but that has cut severely into my home time to finish this project and other art demands. It's fine though, that's how the game goes.

So, last weekend I've been trying to make screens of these, and my efforts have near futile! I am just one of those people who better learns from hands on experience with an instructor. Working from a book, Youtube videos (Look up Catspit Productions for great tutorials), and forum troubleshooting has been great to a point. But honestly, things would have gone more smoothly with a pro explaining what I'm doing wrong. Below are some pictures of my experiences so far: 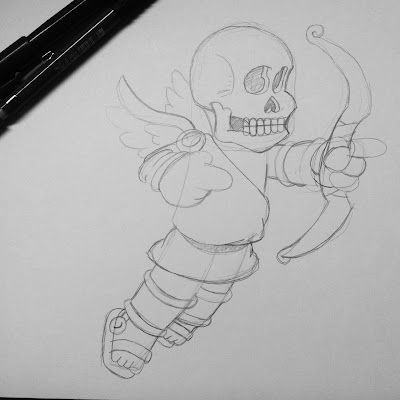 This is a rough sketch of a Kid Icarus día de los muertos print. 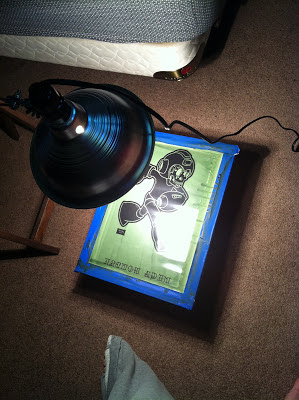 Burning my image with my old setup, which is a clamp lamp and a 150 watt bulb. Takes 45 minutes though, not efficient. I found an Ulitech 500 watt halogen work lamp at Lowes Hardware for $12, which shortens the process to 12 minutes. 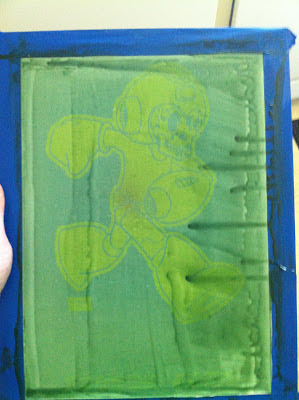 I am not skilled at making a smooth coat of emulsion yet. This is directly after burning, then I wash it out. I learned something though, which you will see in later pics. 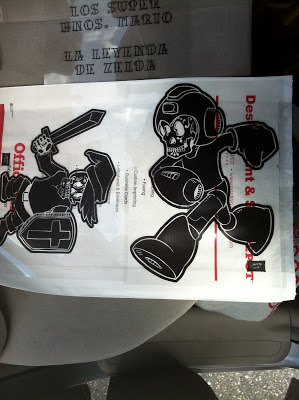 My films I made at Office Depot for .50 a piece. 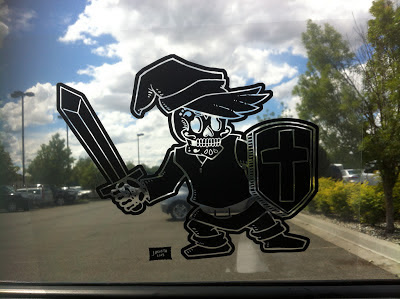 For fun, I took pictures of them against my car window. Makes me want to print up window clings! 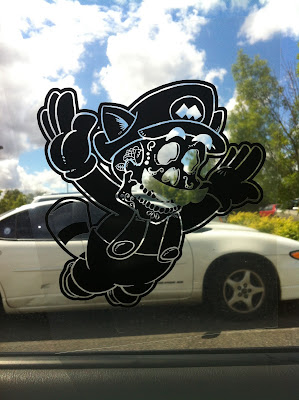 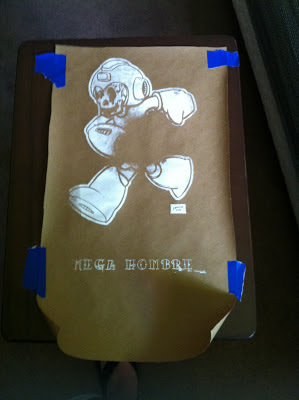 On this print, I accidently bumped the film at some point in the middle of the long 45 minute process, and it made a ghost image, which ruined the picture. Also, as a side note, I've been using brown paper from the dollar store as test paper. A very good idea before trying on expensive paper or clothing first. 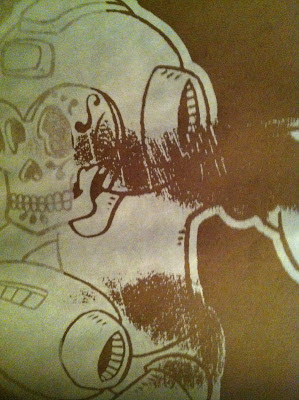 This was a second burn, and I learned another thing. If the screen isn't washing out easily, it's a potential sign that your film positive isn't doing its job of protecting the screen from UV rays. 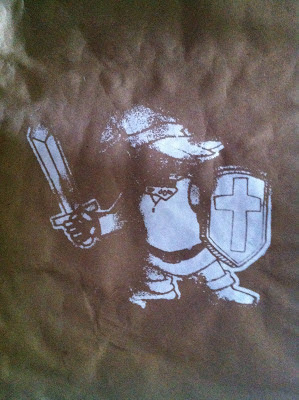 So thank God I am stubborn. Now that I have realized the image isn't dark enough, I'm going to double up the film like several people online suggest. I've also taped the film against a piece of glass so it doesn't move and has contact on the screen. I need to make some more film positives to double it up, and buy some screen reclaimer, and I'll be at it again this evening.

Hell or High-Water, I shall have grasped screen printing, and have at least one print at the con to show. If any of you are screen printers, I'd love to hear any suggestions. I'm just learning this as I go, and doing my best. I'm having fun so far, even if it hasn't been easy.
Nothing worth learning ever comes easy.